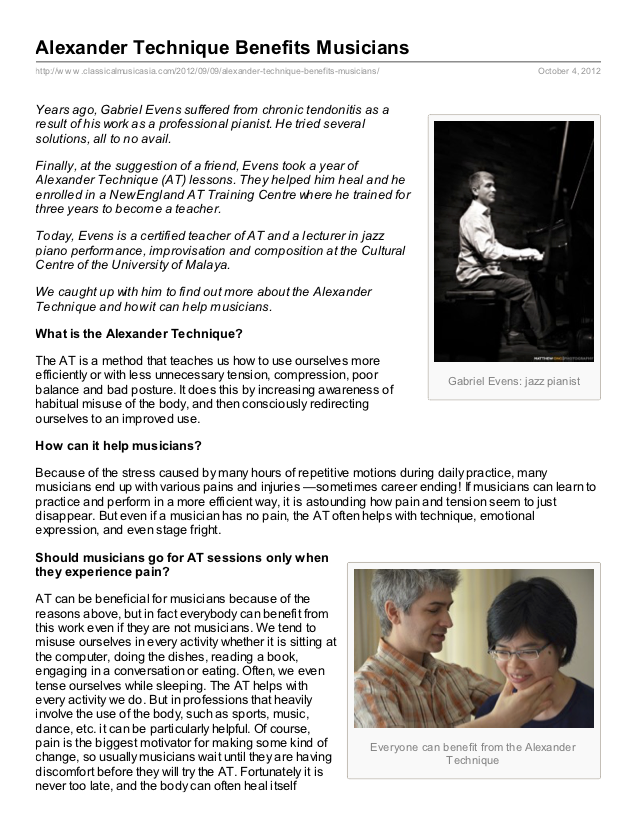 What is Alexander Technique?
The Alexander Technique is a century-old method that teaches us how to use ourselves in a more beneficial way. We are all born with a reflex that counteracts the downward force of gravity and allows for an efficient use of the body. This reflex is governed by the relationship between the head, the neck and the back. Alexander called this relationship the primary control. Most of us have developed habits that interfere with the primary control, and the resulting lower standard of functioning causes tension, inefficiency, poor coordination, stiffness and pain. With the Alexander Technique we learn to recognize these harmful habits of misuse and stop them. The result is muscular harmony throughout the body and improved general health.

Who can it help?
The Alexander Technique can provide great relief for people who suffer from chronic pain, stiff necks or backs, repetitive stress injuries such as tendonitis and carpal tunnel syndrome, or pain in their joints and limbs. Others who may benefit from the technique include office workers who spend hours each day in front of a computer or at their desk, musicians who want to improve their performance capabilities, businessmen and women seeking to present themselves with more confidence, educators of all kinds, public speakers, those who stutter, and people who suffer from headaches and dizziness. The Alexander Technique complements and often reinforces the results of chiropractic, massage, and physical therapy, as well the practice of yoga, Pilates, Feldenkrais, and so on. Remember, the Alexander Technique is not a therapy or treatment. Rather, it is a method that teaches us how to use our bodies more efficiently, which can either prevent problems from starting or allow pre-existing problems in the body to heal themselves.

Who is Alexander?
F.M. Alexander (1869-1955) was an actor who developed his technique while looking for solutions to the chronic hoarseness and throat problems that had begun to impede him in his career. Upon finding that his doctors were unable to help, he took matters into his own hands. As he carefully observed himself in the mirror while reading his lines, he became aware of the pattern of habitual behavior that was causing his throat problems. Alexander spent the next nine years studying his own use, thus developing what is now known as the Alexander Technique. He dedicated the rest of his life to helping people by educating them about his discovery.

What happens during a lesson?
During a lesson you make a series of simple movements with verbal directions and hands-on guidance.  These movements give you the experience of moving with less tension while associating the new movements with the verbal directions.  Through this process, your sensory awareness improves and you notice your habitual misuse in daily activities.  You will then have a choice to say no to the habit and to give yourself the verbal directions to effect a positive change.  The constant improvement being applied to the use of your body in everyday activities can have enormous benefit.

How does it work?

There are five main points to the Alexander Technique:

• Awareness of the habit. As habits are often subconscious, we must first notice them in order to change them.

• Inhibition and non-doing. We learn to say “no” to the habit and to an immediate reaction to stimuli, allowing us the possibility to react in a different way.

• Recognition of faulty sensory awareness. What we think we are doing and what we feel to be correct is often distorted.

• The need to send directions. We must consciously guide ourselves using a set of orders aimed at an improved organization of the self.

• The existence of the primary control. There is a dynamic relationship between the head, the neck and the back, which when used properly will restore an innate reflex that counteracts gravity and allows for freedom of the limbs.

Does it hurt?
There are a wide variety of reactions to the Alexander Technique from feeling relaxed to feeling strange and even both at once.  Generally, the types of carefully guided movements during lessons do not hurt.  However, because the goal of the lesson is to cause an improvement in use of the body, there must be some real change. With change comes new sensations, some of which could be uncomfortable. Also, there can be minor soreness or stiffness with a change in how muscles are being used.  While some muscles relax, others will have to work harder.  Occasionally, a student will be so anxious to improve his or her use that he will exert far too much effort throughout the week which can cause unnecessary pain.  It is important to realize that at the beginning we are just trying to increase awareness and to inhibit our habits but we don’t want to overwork ourselves.
It is crucial that if you are experiencing an unusual amount of pain you tell me immediately so that you can stop lessons and go see a doctor!

How many lessons are necessary?
How many lessons you take depends on why you are coming and how you react to the work. Ten lessons will generally be enough to effect a permanent positive change in use.

How much does it cost?
The cost of individual lessons is $60 per 45-minute lesson. There is a student discount.

Both my 16 year old daughter and my 13 year old son suffer from scoliosis. Alexander Technique with Gabriel has helped my children so much. My daughter’s physique looks straighter and she thinks that she has grown by a couple of inches! She tells me that her daily physical movements have become more effortless. My son’s back is also straighter and he feels better generally. Their music-making seems to have also improved as their sound has “opened” up a lot. Thanks Gabe, for all your help!
— Dennis Sim

My ability to play flute and piano…has improved immeasurably. I can go through a day with much more stamina and happiness no matter what I’m doing. I’ve been through many years of studies…but none has been transforming, as healthy, or for lack of a better word, ‘ability-improving’ as learning the [Alexander] Technique.
— Anne Gasper | Professional
Musician

Gabe’s teaching has helped me tremendously with my body awareness and in turn my body alignment.  This technique has given me the skills to free my neck and upperback from the tension and pain I was experiencing.  I would recommend this technique to everyone and anyone.  We could all use a little more body awareness.
— Jennfier S Jackson | LMT

It is my pleasure to write a statement of my appreciation of the work that Gabe Evens does with the Alexander Technique.

I met Gabe when he offered to do an introduction in my body/mind class in the Masters Degree Program in holistic Counseling at Salve Regina University.  I was struck with his earnestness and enthusiasm for his teaching of the technique.  It was clear and effective and elicited attention from the students, who were impressed with the demonstrations.

Subsequently I personally have been receiving lessons from Gabe weekly for four months.  I will be sorry to see him transfer to another state shortly.  In the time I have been receiving lessons, I have been impressed with Gabe’s style of teaching.  It is something that he lives and he is able to share his awareness of his use of self while working with another, which makes it genuine.  I trust him.I am struck by the patience Gabe exhibits in the lessons.  He is structured and works in little steps so as not to confuse.  His ability to notice when corrections are needed impresses me.  His hands are deft at guiding, and he is creative in designing movements which are practical in daily living.  His style is gentle and gracious.  He knows how to teach.I feel that my body has straightened; that I am actually taller.  My shoulders tend to come down from habitual holding. I walk more correctly and my body conserves energy when I am using it at work.  My neck used to be very sore; now it is greatly relaxed.  I have more energy to live by.  My hips and knees are more flexible and freer from soreness.  All of this I relate greatly to the lessons that I have been taking with Gabe.
— Jack Childs | Ed. D, Professor/Founder, Holistic Counseling Masters

Gabe helped me to become aware of my bad habits and consciously change them which led to an improvement of my general physical health.  Surprisingly, my emotional state also improved.
— Antonio Monteserin | Language
Instructor

Gabe Evens has been instructing me in the Alexander Technique for approximately 6 months, and I can highly recommend him for his technical ability, as well as his professionalism and sensitivity.  His gentle and skillful manner quickly set me at ease about letting him work on my body.

Although, I was not experiencing chronic pain, I had unconsciously developed some poor habits with my posture.  Whenever I was very tired or encountered stressful situations, the improper way I held my body caused extreme discomfort and, consequently, frequent visits to the chiropractor and massage therapist.  I also had a history of stress headaches.

I was surprised to learn that there was actually something that I could do to prevent the problem, and not just to relieve the problem temporarily.  the Alexander Technique has put me in control of my own well-being.  It is incredible.The technique is not terribly difficult to learn.  However, like anything new, it takes repetition and practice to make it one’s own.  Gabe is moving out-of-state now and so I cannot continue my lessons with him, but I am so grateful that I had the opportunity to learn what I did. I can wholeheartedly endorse Gabe as an Alexander Technique instructor.  He sincerely wants all of his clients to feel better and be better.
— Joyce Kilmartin

Mr. Evens presented a series of two workshops/demonstrations of Alexander Technique at Rhode Island College.  These workshops were arranged after a long series of telephone calls and email messages between us, trying to work out the details of scheduling. However, in the final event, the workshops were well worth the effort. Student attendance was strong, and interest was even stronger.  His demonstrations with individual students produced visible and immediate results, such that when he offered to teach individual lessons for a day, the schedule filled up quickly.  The students who took lessons with him claimed immediate benefits.

Mr. Evens is a fairly quiet and unassuming man, quite congenial, and a pleasure to work with.  In all our interactions I found him to be flexible and reasonable.  Above all, he is professional.  I regret that he is leaving the Providence area, because I would like to work with him again.

I commend Mr. Evens as a competent professional.
— William M. Jones | Professor of Music and Education